One year away from what is bound to be a huge tenth birthday party in 2018, this year’s Tramlines provided the biggest and most eclectic lineup to date and Halfway 2 Nowhere was there to document it all. From the main stages, to the smallest fringe stages and everything in between, we made sure our first experience of Sheffield’s premier annual event was done right.

Arriving late on Friday afternoon, unfortunately we missed Liberty Ship a band we’ve followed for some time. Reading the reviews the morning after it sounds like the young band gave a sterling performance on main stage and had they had a prime slot the following night, would have drawn a huge crowd.

The grey skies dominated Sheffield into the early evening but the sun persisted and came through for Twin Atlantic’s main stage set. With a very untypically slow start, playing three relatively unknown tracks, it took The Chaser to lift the Libertines dominated crowd. What followed was a set full of hits from their three mainstream records with Ex El and Make A Beast of Myself the stand out tracks. With the Tramlines main stage sound understandably quiet, it certainly wasn’t the most brash and best Twin Atlantic performance we’ve seen but as ever, Sam and the band gave it everything they had and they let their fans close out the show with huge hit Heart and Soul in a great way. 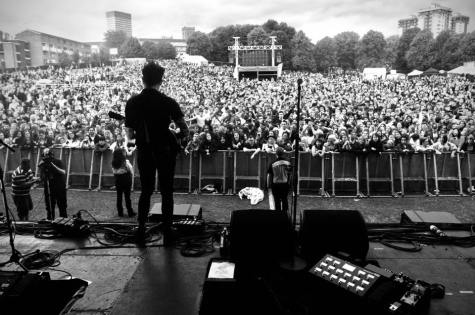 Regardless of the extortionate bar prices for an inner city festival, the crowd were in extremely good spirits and as the main act of the night came on to stage, there were huge roars for Tramlines’ biggest artist of the weekend. As is often the case with a Libertines show, many people in the crowd were reserved until Can’t Stand Me Now came on but the seven preceding songs were performed in typical Libertines style and the band were certainly on form. Rifling through all the classics from the early 00’s the band came back to the biggest sing along of the night Don’t Look Back Into The Sun. It was a resounding success of a set and the band went well over curfew providing their adoring fans everything they could have asked for to kick off their Tramlines weekend.

The highlight of the night however was back down on Carver Street at 10:15pm. The arrival of Billy Bibby and the Wry Smiles to the Crystal Stage was one that was met with huge cheers not too dissimilar to what the Libertines had earlier achieved on the main stage. I have a lot of time for Billy Bibby. If you ask me the music he produces is better quality than that of his previous band and the group of musicians he has with him currently seem so tight on stage. The performance was flawless and I left wanting a lot more. Halfway 2 Nowhere recently interviewed Billy and his band so keep a look out for that over the summer.

Nobody likes the first morning after night one of a festival. Saturday morning at Tramlines was much the same but we were up bright and early to get ourselves back to where we left the night before to catch Cabezudos at the Crystal Stage. The band kindly played for us at a show raising money for Oxfam earlier in the week and they blew us away so much it was impossible to miss them at Tramlines, The band from Liverpool have a huge future with a blistering rock n roll set with huge indie hooks blended in. It was a well performed set and we spent most of the day getting to know the guys. Hopefully we will work with the band again very soon – without doubt the highlight of our weekend. 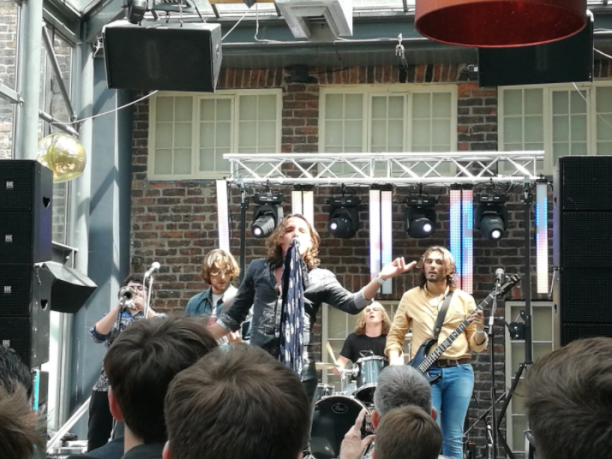 After watching a huge set from the band, we headed to Crucible Corner to see our good friend Harrison Rimmer whose brilliant new single is released next Friday. With the sun shining and beers flowing, Harrison came out and performed a perfect set of covers and brilliant originals from the past few years. Not many acoustic performances involve mounting a table and the use of a smoke machine, but then again, not many acoustic artists are Harrison Rimmer. Great show, well worth the trip across the city.

Up next were Oddity Road who performed a strong set to a full Crystal Bar with fans awaiting the arrival of The Sherlocks who had confirmed rumours of a secret set earlier that morning. The crowd was buzzing and with bouncers jumping in to try and control the crowd inevitably failing, it was a rowdy half hour in which the popular local band rifled through all the released hits from their upcoming record.

One of the day’s highlights was Frazer who performed with ease and grace and put on a great show to the still full Crystal Stage. A band we’d not come across before, Frazer had a lot of power and prowess and will be ones to watch in the future. With the rain coming down we decided to avoid the rush back to the main stage until later on and instead watched the interesting performance of Hands Off Gretel. After seeing them in York earlier in the year I was looking forward to their set and they truly delivered; Lauren was on fire out front in full leopard print and was one of the days most explosive sets

It was finally time to head back to the Ponderosa for an evening with Primal Scream. Having never seen the band live this was the set we were most excited about seeing and the Scottish rockers delivered on levels unimaginable. In the pouring rain they continued to wow the packed crowd who were embracing the torrid weather. Rocks and Come Together were the highlights to end a simply brilliant Saturday evening. 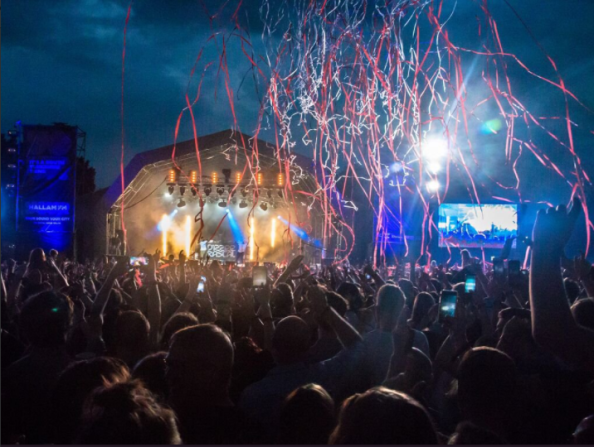 Photo Credit: Flick of the Finger

Sunday was one of recovery and we started the day off slowly – opening with a coffee and a full English we then headed over to one of the smallest venues on the fringe to see Puppet Theory, or half of the band should we say, play a superb half hour set. We met the band earlier in the week on the same bill as Cabezudos and it was nice to see a different side to the band. Not many bands come across too well acoustically but Puppet Theory did and should maybe consider a couple in the style they played at full band shows. Although there was no crowd to start, the room slowly started to fill and by the end there was a fitting crowd for the duo. Big things expected from these guys in the next year.

Before interviewing the beautiful Cattle and Cane (to come soon) we stuck around at the O2 Academy to see Jerry Williams a singer songwriter all the way from Portsmouth. She had a stunning vocal which was raw and almost poetic at times with her lyrics. With a great Jamie T cover and a range of beautiful originals, we firmly believe this talented 21 year old has a big future ahead of her. After that Casey Lowry played a phenomenal show back at our favourite stage on Carver St before we headed off to Devonshire Green for the first time.

We finished our day very early with tiredness kicking in and traffic building so ending our day was Mike Hughes and his band who, to put it simply, blew me away. The band’s power, ease of performance and general talent was clear to everyone and the confidence on stage was matched with the quality of the tunes being performed. Ending the day were the SSS who, to be honest were decent, but overly bland following Mike and his band.

Tramlines 2017 was an amazing, expensive experience but one Halfway 2 Nowhere can’t wait to replicate next year for their tenth birthday.