This July – Halfway 2 Nowhere will be flying out to Portugal for the biggest showcase of live music the country has to offer. Chris gave the festival a preview ahead of the event next month.

What is Nos Alive?

Nos Alive is an annual three day music event held in Lisbon in early July. I’m lucky enough to be going for a third time this year. While it’s very true that despite the hype Nos Alive is no Glastonbury, I rather favour aspects of Nos Alive for the following reasons. It’s quicker and easier to get to Nos Alive than Glastonbury. Nip to Manchester, grab a flight, tube down to the coast and you’re there.

It’s far cheaper than Glastonbury. For the price of Glastonbury tickets I got Nos Alive tickets, flights and some of the hotel covered. Given food and drink is cheaper in Lisbon I bet the overall cost for the whole shebang is about the same. You can then spend a week in Portugal on holiday with the flights “covered”.

It’s always sunny. There’s also always a cool breeze at the Nos Alive venue on the sea front (take a light jacket, jumper or something for later), but I’ll personally give you a piggy back if it gets muddy and you need wellies.

It’s in Lisbon, a totally stunning city with a great bit of coastline. You can join the beautiful people (and me) in the magnificent town of Cascais at the end of the city train link. There’s no having a niggling thought about whether someone thought it funny to pop a turd on your pillow in your tent for you to find later. There’s hotels. Yey!

It’s all about the music and in addition to the very top artists the organisers throw in a few curve balls. I’ve seen two of my very favourite bands at Nos Alive; Young Fathers and Jagwa Ma. Wolf Alice, Counting Crows, the 1975 and the Jesus and Mary Chain were also excellent.

Some of the top bills are obviously more popular in Portugal than in the UK. Depeche Mode headline at Nos Alive this year, and a few years ago we saw the really rather pedestrian Aussie band Shepherd play to a packed audience on the main stage and they touchingly became totally emotionally overwhelmed by the experience; they sang their hearts out and loved the gig of their lives.

When everyone comes back from Glasto, tired, glazed eyes and ratty hair, with a silly grin on their face, you still have Nos Alive to look forward to. 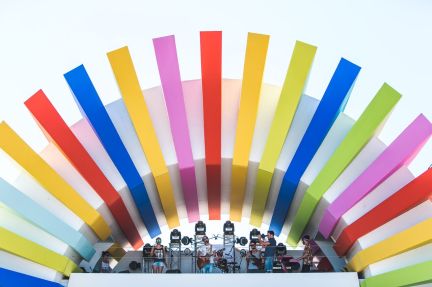 Of course, it’s not all good;

There are 7 stages, a rather pointless welcome stage where bands play in a cube above your head as you enter the venue and there’s not a great amount of space to hang around, the main stage, a secondary main stage, a clubbing stage, an “introducing” stage, then the comedy club and Fado bar. Of these, most of the comedy acts are Portuguese so unless you have the language it’s a bit pointless, and it’s in a huge tent which means in the Lisbon sun it’s rather like sitting in a sauna only without the relaxation bit. I like glum Fado music where people wail about how cruel the world is, but the Fado bar is tiny and you really struggle to get a view. This all means that although there are 7 stages, in effect there are only 4 to really think about.

We are living Euro time so the main acts are on well after midnight. Where was I when Grimes was playing at 1:30am? Staggering back to our hotel after too many Licor Beirao Caipirinha Cocktails; pacing was never my strong point.

Heineken sponsors Nos Alive and that’s the only beer in town; hence the over reliance on Licor Beirao Caipirinha Cocktails.

You have to cross “the bridge of death” at the end of every evening. The local train station is tiny and the organisers have you stomping over a mile long flyover each evening to manage things. It’s not a great way to end the day.

The “introducing” stage is in a nice spot where you can sit and watch the world go by and look at the food stalls. Most of the bands on this stage are from Portugal and while some of them are very listenable, others sound like their ideal dream is to manage to play “Hotel California” note perfect. The music is a bit “pot luck” so the focus has to be on the big acts at Nos Alive.

On the 6th July I’m excited about Blossoms, the XX, Glass Animals and the amazing Royal Blood. Sadly I find the headliner for the day, The Weeknd, really boring, and in my book Alt-J can only be relied on to kill a festival atmosphere stone dead. I might well take a peep at Ryan Adams just because he’s gonna be close and I’ll also keep an eye out for dancey, spacy Rastronaught because he has the absolute coolest name in music.

Friday is Foo day – it’s Foo Fighters night. I like the Foo’s but there’s something about Dave Grohl’s confidence that makes me wary. They are no Nirvana (who are one of the bands I adore and seriously escaped into during a bad patch), but hey, it’s the Foo’s so we will be there and we will be happy. While we wait there’s Wild Beasts, the Courteeners and The Cult. Now The Cult are a band I’ll be seeing through half opened fingers across my eyes. I admired the Cult as a teen (ha “ladmired”), and I’m kind of assuming they aren’t playing Nos Alive for public humiliation but there’s always a concern that they might have “ahem” gone off the boil (and their last album ain’t great).

On the final day, there’s something of a mixed bag. I often imagine that the promoters bundle up bands “OK, you want the Foo’s? You realise you will also have to take Kodaline?” This day feels like a pile of mid-sized stadium rock bands are out to play. However, one band I’m really excited to see is the Australian Avalanches; I adore their mixed up quirky music, and their return album Wildflower gets a regular airing in my house. That other blast from the past Depeche Mode are headlining and unlike The Cult have just released a perfectly acceptable album, Spirit, which actually adds something to their back catalogue. I’ll also be looking out for the Discotexas Band for a bit of light hearted dancing. Of course I’ll also be in the mix for Cage The Elephant, as I’ve heard nothing but good things about them live.

With Nos Alive 2017 the line up is certainly as impressive as any festival this summer and the acts are nicely spaced out so there isn’t a flat day of the three. Behind those main acts, Nos Alive always feels just a little thin but considering I spend the remaining 362 days hunting down smaller indie bands, it does no harm to focus on the big boys for a little while. If you are doing Nos Alive this year I’ll be seeing you at the Beirao Licor stall.