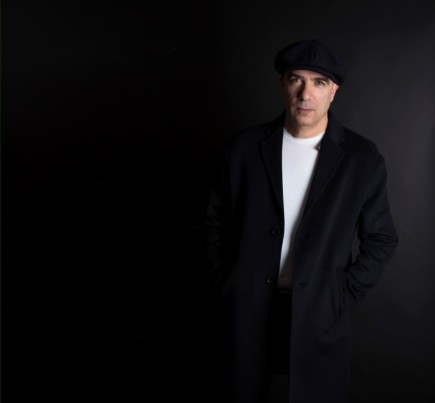 Frankie Oliver, a former Island Records star of the late 90s, has followed suit in the contemporary craze of comeback albums. However, this new endeavour sees a large departure from the Reggae genre, instead, with Oliver branching into profoundly more soulful and bluesy territory.

Having left the pop-star life to spend more time with his wife and children, over the last two decades Oliver worked as a cab driver in London, reportedly always ferrying his beloved Telecaster with him wherever he went – suggesting it might be osmosis that is responsible for the rockier sound Oliver is now adopting. This twenty year germination in the front seat of a black cab has lead to an album of richly orchestrated soulful musings on thoughts of time and, most overtly, love. This is definitely not hard to miss, and can be picked up simply by looking at the track listing, featuring titles such as, ‘Gone Are The Days’, ‘Cos Of You’, ‘I’ve Got Love’, ‘My Kinda Woman’, ‘She’s Beautiful’, etc.

The album Here I Am kicks off with two fantastically punchy tracks, establishing the tone as one influenced primarily by very early R&B figures. The influence of Screaming Jay Hawkins on these first two tracks is clearly apparent, from the rocking Piano in ‘Gone Are The Days’ and the almost Gothic sounding organ in ‘Tell Me’, to the manner in which Oliver carries the melody itself. His voice suits this style perfectly and this opening really sets up the album well.

Oliver’s Reggae roots are not absent from the album by any means. The track ‘I’ve Got Love’ gives the first hint of this, with its underlying wah pedal driven rhythm capturing something of Oliver’s previous work. This is then dialled up considerably in ‘She’s Beautiful’ where Funk and Reggae stylings really move to the forefront. However, at the point of listening to ‘She’s Beautiful’, my main problem with the album emerged. I could not help but feel that the album had really come under threat from the narrow choice of subject and voice. Oliver deals with love and how time has passed very overtly, and exclusively, from the beginning, meaning that by the time we get to ‘She’s Beautiful’, lyrics such as ‘she’s beautiful, she’s amazing, and I’m praying one day she’ll be mine’ start to become a bit banal in the wake of the similar subject matter being dealt with in the same manner.

As a consequence of this, I felt that the album began to drag a bit towards the end of the second half, although, there were two exceptions to this. ‘Honey I’m On Fire’, recaptured a lot of the Screaming-Jay-Hawkins-esque – my new favourite adjective – vibe that I felt Oliver had thrived in producing in the first few tracks. The other track which surprised me towards the end was the finale: ‘Things I Was Told’. The closing track really strips away a lot of the orchestration leaving Oliver’s vocals to carry more weight, and the lyricism here moves into much more sincere and carefully crafted storytelling. The track owes a great deal to Louis Armstrong’s ‘What A Wonderful World’ and is a fitting end to the album.

Overall, Frankie Oliver’s Here I Am gets a 3.5 out of 5. Standout tracks ‘Gone Are The Days’, ‘Tell Me’ and ‘My Kinda Woman’ really hold the album up, creating that timeless sound which makes for thoroughly enjoyable listening. The occasionally flat lyricism and slight dragging sense that I couldn’t escape feeling towards the end of the album brings it down a bit, but the final track reinstalls that timeless sound just in time. For me this album is definitely one of the better examples of comeback records that are so rife now-a-days, and I would be very surprised if we had to wait another twenty years for the next release.