This coming winter two of Halfway 2 Nowhere’s favourite artists Beans on Toast and Skinny Lister will head out on a co-headline tour of the UK.

Label mates, touring buddies and drinking companions they make a perfect match. Both bands are hardworking, fun Loving, heavy touring acts that bring a unique and modern take on the age-old tradition of English folk music. Together they are given the opportunity to play on bigger stages and bring their shows to larger audiences. Both bands will be playing full sets. It’s going to be one hell of a party. So without furtherado we’re proud to announce..

For Skinny Lister, this tour will wrap up the worldwide campaign of their third and critically acclaimed album ‘The Devil, The Heart & The Fight’. Following up on a fully Sold Out UK tour in May after another in October ‘16, extensive tours of Europe and The USA and a Summer ram packed with festivals including a prestigious slot on Glastonbury’s Avalon stage on Sunday night. 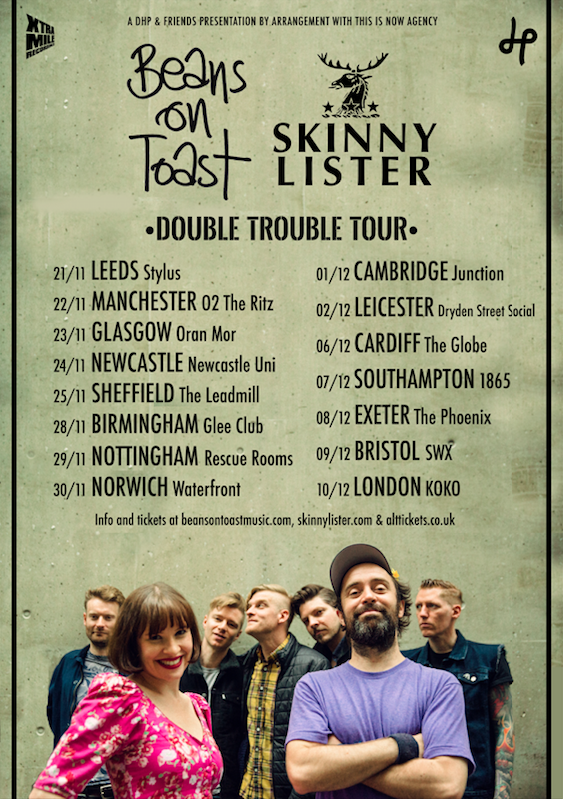 This tour will also act as the UK album tour for Beans on Toast’s 9th album, released slap bang in the middle of the tour on 1st December. He’ll be bringing a full live band with him with fiddle, accordion and honky-tonk piano playing a mix of brand new tunes from the forthcoming album and old classics from his huge back catalogue.

Both acts release music on Xtra Mile Recordings, home to Frank Turner, Against Me! and Will Varley to name just a few. The label prides itself on community and family values as well as punk rock attitude and incredibly good music.  All of these aspects will shine through in this awesome collaboration of a tour.